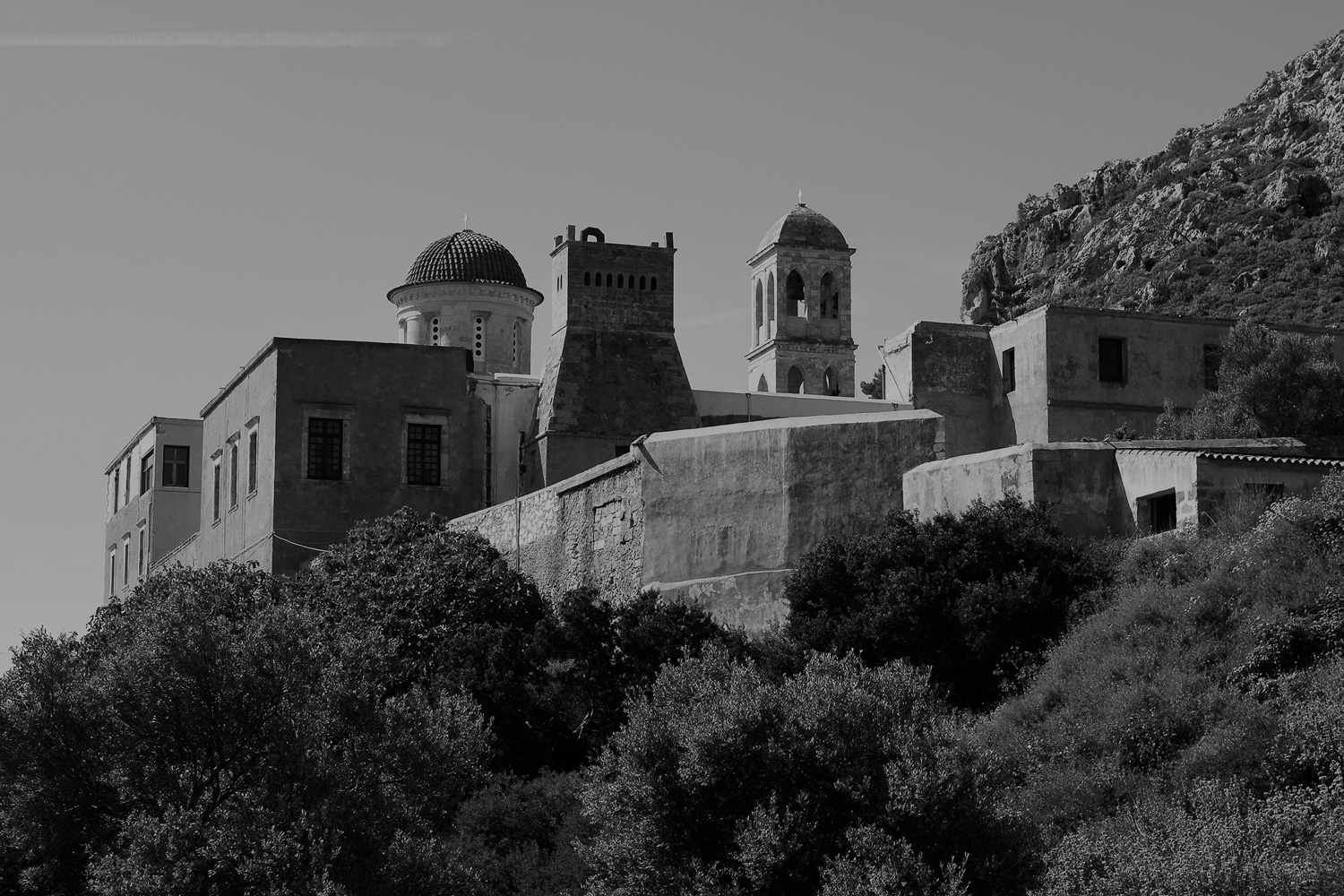 IN KOLYMBARI, CHANIA
Discover Gonia Monastery, or Panagia Odigitria
SCROLL
A well-known monastery in Kolymbari, with great architecture and a fine ecclesiastical museum

Gonia Monastery (or Panagia Odigitria) in Kolymbari, is the most known monastery in the northwest of Chania region. It is built just outside Kolymbari village, in a distance of less than a kilometer away, right after the village’s harbour.

The name Gonia Monastery means in Greek “Monastery of the Corner”, due to its excellent location.

Its other name, Monastery of Panagia Odigitria, means in Greek “Monastery of Mother Mary the Leader”. It has to do with the story about the first donor of the monastery, monk Vlassios from Cyprus, when he rebuilt it in the 17th century in its current location. According to tradition, he was led to the exact location by Mother Mary.

The architecture of the monastery is very interesting. It follows the Venetian style with a narthex and a dome, and a number of smaller chapels around the monastery. From the outside it looks like a small fort, and it was built this way to be protected from pirate raids.

The location of the monastery is also outstanding: It is situated on top of a hill in the south of the scenic Rodopou peninsula, overlooking from above the wonderful Chania Bay. Next to it, a very known religious institution has been recently built: The Orthodox Academy of Crete.

Inside the monastery, you can find the remarkable Ecclesiastical Museum of the Monastery of Gonia. If you are interested in religious history, this museum is a must-see. It has icons of great artistic value from the 14th century onwards, which were made by famous painters of the time. It also has two old Monastic Codes which describe the history of the monastery in detail, and centuries-old manuscripts and sacred utensils. In the museum you can also find an interesting exhibition of vestments.

As it was the case through the centuries, today the Monastery of Gonia plays a crucial role in the local religious and social life. Its monks serve the religious and spiritual needs in many villages, volunteer in charitable institutions of the local Metropolis of Kisamos and Selinon, and also teach in local schools.

Also, in recent years the monastery has produced significant pieces of land for the development of facilities in the region of Kolymbari, such as the High School, the Agricultural Association, the Union of Agricultural Cooperatives, the Center for Rural Development, the Ecclesiastical Boarding School, the Stadium, the County Court, etc. Last but not least, it offered an exceptional piece of land next to it, for the establishment of the Orthodox Academy of Crete.

The original monastery was built by hermits in the 9th century on the ruins of the ancient temple of Artemis Vritomartis (Diktynna) in Menies, in the north of the Rodopou peninsula. It was originally dedicated to St. George. Due to the frequent pirate raids in the area, however, the monastery was rebuilt in its present location in the 17th century, founded by monk Vlassios in 1618. Later, his work was continued by monk Venedictos Tzagarolοs.

During the era of the Ottoman occupation of Crete, the monastery of Gonia was essentially a small remote fortress, and, as such, was frequently used by Cretan rebels, who had the support of the monks. Needless to say, the Ottomans had no problem to bombard and destroy parts of the monastery, which they did several times from the 17th up to the 19th century. As a remnant of the monastery’s turbulent past, there is still a cannonball lodged in a monastery wall from a bombardment of the Ottoman era.

The last time the monastery was bombarded and partly damaged, was during World War II by the Germans, as it was a stronghold of the local resistance. But each and every time through the centuries, the parts of the monastery that were ruined were soon rebuilt.

Gonia Monastery has actively participated in significant events that shaped the history of Crete. In 1897, 1.500 men disembarked on the beach in front of the monastery, starting the last important Cretan revolution before the autonomy of Crete in 1898. Also, during the Battle of Crete in World War II, its monks were imprisoned by the Nazi German forces, as they had provided shelter to allied English forces.

Gonia Monastery (or Panagia Odigitria) in Koymbari, is much more than a place of worship and monasticism. It is a living witness of the rich history of Chania and Crete through the ages.

If we also take under account that it is easily accessible, as it lies just outside the beautiful village of Kolymbari, a visit to the outstanding Gonia Monastery and its ecclesiastical museum is a wonderful experience that will deeply reward you, when you are vacationing in Chania.